Final results for the 2018 California Assessment of Student Performance and Progress (CAASPP), released Oct. 2, showed that Sonoma County students continued their steady improvement since the first year of testing in 2015. As well, they performed better than the state average in English Language Arts and on par with the state in math. However, it is important to note that this year’s results for Sonoma County cannot be accurately compared to previous years’ testing, as Sonoma County’s largest school district did not test students due the impact of the fall 2017 wildfires.

Sonoma County results showed gains in both math and English Language Arts (ELA). In math, the percent of students meeting or exceeding the standard ticked up to 38.6 from 36.6 percent the year prior. In ELA, the percent of Sonoma County students meeting or exceeding the standard rose to 51.3, compared with 48.6 percent in 2017. That compares to the state average of 38.7 in math and 49.9 in ELA.

“The fact that student progress maintained and even increased in such an unprecedented year is remarkable,” said Lyndsey Munn, SCOE’s Director of Data and Assessment. She noted that last year’s fires led to weeks of lost instructional time for many students, including days when school was closed as well as days needed for emotional recovery once school resumed. “Every single student and adult in the educational system was affected by last year’s disaster,” she said. County Superintendent Steve Herrington agreed. He attributed the positive scores to the efforts of school teachers, counselors, administrators, and support staff who worked around the clock to ensure that students’ emotional and academic needs were met during and after the fires.

A particularly positive trend this year was that every cohort of students saw improvement in ELA. A cohort refers to the same group of students tested over multiple years. 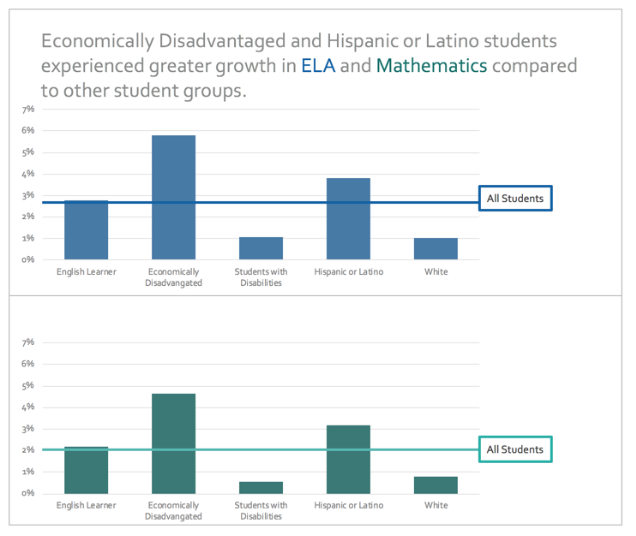 The tests highlighted that the achievement gap continues to narrow. While all major student groups showed progress, economically disadvantaged and Hispanic or Latino students experienced greater growth in ELA and math compared to other student groups over the prior year.

Dr. Herrington said schools are studying results and looking for ways to increase achievement for all students while also narrowing the achievement gap. He said that the Sonoma County Office of Education (SCOE) will be working closely with school districts in 2018-19 to support their efforts.

The CAASPP tests gauge student learning in math and ELA. They’re designed to help schools and teachers identify areas where they are serving students well, in addition to areas where they need to adjust instruction to better help all students succeed.

For each grade level and subject area, students receive a score ranging from around 2,000 to 3,000. The overall scores fall into one of four achievement levels: Standard Exceeded, Standard Met, Standard Nearly Met, and Standard Not Met. These tests are only one way of tracking individual student performance and should be used along with student projects, portfolios, progress reports, and interim assessments given throughout the school year. They are also just one of many measures of school and district success in the state’s new accountability system, along with college and career readiness, the high school graduation rate, and others. Detailed information about school and district performance can be found at caschooldashboard.org.