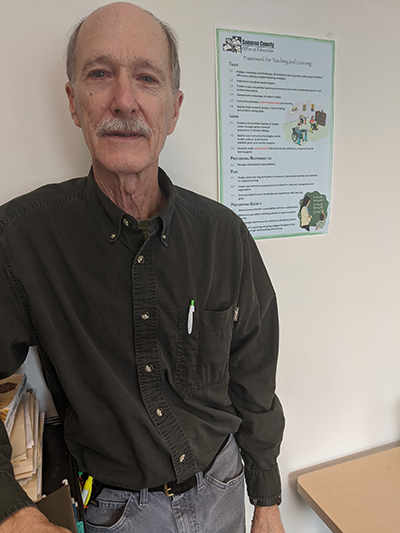 11/13/2019 - Jim Reed has found perhaps his most rewarding teaching experience at Sonoma County's Court School. After teaching in various regular and special education classrooms for years, he has been instructing at Juvenile Hall for the past three years.

It was after substituting at the Alternative Education Court School that Reed found that he really enjoyed teaching incarcerated youth. "There's a real connection to community here when a student buys into the fact that learning, and earning their high school diploma, can have a positive impact on their future."

"It's rewarding helping out students who have a lot of things going against them as they are growing up," said Reed. "Homelessness, bouncing through foster care and group homes, truancy, and gang affiliation are some of the many factors which lead a student into a feeling of despair. As a student falls behind in his or her education, they may eventually drop out," he explained.

"The challenge and balancing act for a teacher here is to help a variety of grade levels and abilities within the same classroom, so they can earn the needed credits during their stay. What is going to help them get back on their 'educational feet', whether it's algebra, world history or another subject, so when they go back to school, they don't have to repeat classes."

One of the teachable moments Reed described happened one day after a very sturdy, athletic girl had been suspended for fighting with another girl. She was physically strong and out-of-control angry. Staff couldn't get through to her. She was suspended to the interview room.

"There I took the opportunity to have a long talk with her, said Reed" "I pointed out the obvious: her anger was controlling her actions. She agreed. So I told her that when I was a teen, a friend of mine and I worked in a toy store. Our boss noted that my friend was often fighting, and suggested that he channel his anger into competing with others in his work, as an outlet for his anger. He ended up having a very successful career."

"I found out she liked to play basketball. She said she could begin to channel her anger more into competing in basketball, so that it would not overflow into her relationships."

"In my present class," Reed noted, "I enjoy joking around a bit with students. They often have a great sense of humor. It lightens the necessary rigidity of the Hall. I can see it lead to positive behavior patterns."