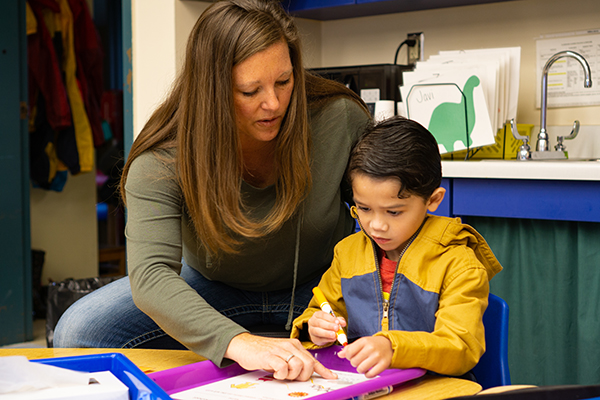 Thompson has taught students with autism at El Colegio for the past eight years and has taught in SCOE special education programs since 1999. She credits Jenny March and Natasha Scott, her classroom aides, as invaluable in the classroom. ôThey make a solid team. Weĺve been together for seven years and I know I can count on Jenny and Natasha and they know they can count on me.ö

ôIn the classroom we employ all evidence-based practices such as Applied Behavior Analysis, Picture Exchange Communication System (PECS), Pivotal Response Training, and Visual Supports,ö said Thompson. ôAt the language station we work on a lot of concepts; empty, full, above, below, together, apart; along with answering ĹWhĺ questions and retelling stories.ö

Thompson also teaches students basic requesting skills using their voice or PECS. ôWith PECS they can build a sentence,ö explained Thompson. ôThey have binders that have pictures in them so they will move the pictures and put them on a strip and hand it to you and point to it and we say the words.ö

Thompson had a student a few years ago that when he first came into the classroom he could not sit down. ôHe had no language, heĺd stand on the tables, he would actually crash into things,ö shared Thompson. ôHe had such a hard time making his way through this world. It was the first year of our program where we were employing evidence-based practices and even I wasnĺt sure how this was going to work.ö

ôSo we taught him the visual schedule, how to use PECS, how to sit at a table and do work,ö said Thompson. ôI had him for two years and by the time he left here he could tell you what he wanted, follow a schedule, do his work, and he would model for other students. He ended up going to a district and is doing well. It was nice to know that even though I wasnĺt sure how this program was going to work, he was the Ĺproof in the puddingĺ. Look at how his life has completely changed."