Winners of the 2014 Science Fair announced 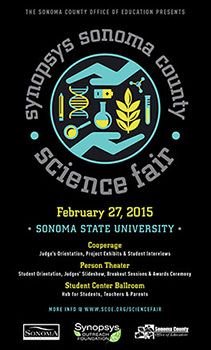 On Saturday, March 1, 156 middle and high school students from 24 schools converged at Sonoma State University to participate in the Synopsys-Sonoma County Science Fair. This event was sponsored by the Sonoma County Office of Education and Synopsys Outreach Foundation. Both the number of schools and number of students participating were records for this annual event.

More than 100 student projects were on display, showcasing the results of research-based science investigations completed by individual students or student teams. Students explained their projects, presented their findings, and were interviewed by panels of judges during the event. Each project was granted points by the judges according to a specific scoring rubric.

Six top-scoring projects earned special recognition. The students completing these projects will receive financial support from the Synopsys Outreach Foundation to present their projects at the California State Science Fair in Los Angeles. These accomplished students include:

Fifty-three individuals—scientists, university professors, science enthusiasts, and others—served as judges for this annual event. Special thanks go to these committed volunteers who have helped to further science learning in Sonoma County.

For more information about the Synopsis-Sonoma County Science Fair, contact Jessica Progulske at (707) 524-8418 or jprogulske@scoe.org