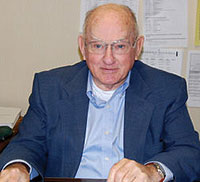 Joe Carnation, longtime superintendent of Geyserville Unified School District, passed away on Friday, April 3. He was a lifelong educator who served his entire career in Sonoma County public schools. He began his career teaching elementary school in Petaluma nearly 60 years ago, later serving in administrative roles in the Forestville, Harmony, and Gravenstein school districts. Although he had previously retired, he took on the part-time superintendency in Geyserville in 2005 and served in that position for 10 years. He will be remembered for his dedication to education and his commitment to the many students that his work touched.