“While the results show that our schools still have work to do helping students excel in today’s changing classrooms, I’m pleased that nearly half of Sonoma County students have shown mastery of the English-language arts materials in this first round of testing,” said County Superintendent Steve Herrington.

This year marks the first batch of results from the Smarter Balanced Assessment Consortium (SBAC) test, part of the California Assessment of Student Performance and Progress (CAASPP) It replaces the old California Standards Test (CST), which was part of the California Standardized Testing and Reporting (STAR) system. This new exam is designed to measure student learning under the California Common Core State Standards rolled out in 2013. Results of the two exams should not be compared because they measure a different set of skills and knowledge.

As well, the SBAC test is administered in a new way, replacing the old fill-in-the-bubble method with computerized exams that require students to be fluent in technology. Herrington emphasized that these tests are just one measure of student performance along with local measures such as projects, portfolios, and student progress reports.

Students were tested in English language arts and mathematics, with scores falling into one of four categories:

Sonoma County Office of Education’s Deputy Superintendent Mickey Porter said this be could attributed to a broadening of the areas that students are being asked to demonstrate knowledge of in the new tests. “Students are no longer just being asked to learn and perform procedures,” she said. “Now, they must also demonstrate knowledge of complex concepts like data modeling and problem solving, as well as communicate their reasoning.” 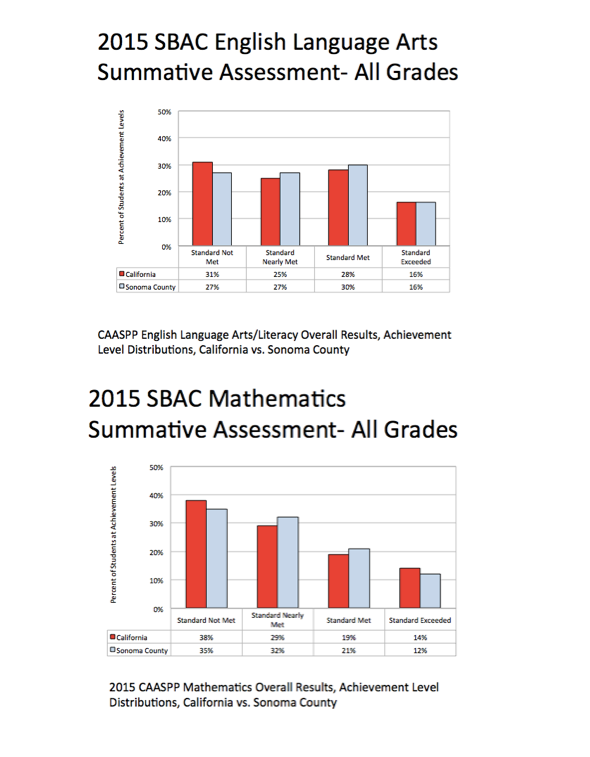 A notable area of success was in grade 11, English language arts assessments, where 60 percent of Sonoma County students met or exceeded the standard. That compares to 56 percent statewide. County Superintendent Steve Herrington attributed this, in part, to the success of Career Technical Education programs that have been emphasized around the county in the past two years.

“Connecting reading and writing to students’ future jobs and careers has helped bring the subject alive for them,” he said.

A significant achievement gap also existed among students who are economically disadvantaged, English learners, and students with disabilities. These disparities were not unique to Sonoma County: statewide data showed similar trends.

Dr. Herrington emphasized the need to continue addressing the achievement gap. He said the Sonoma County Office of Education and area school districts can do so by continuing to adjust curriculum and teaching to meet students’ needs, as well as by conducting more frequent checks of student understanding and personalizing learning more.

“These tests were designed as an academic checkup to see how instruction is matching up with the new California Common Core State Standards,” he said. “The results show areas where we can focus our efforts and make improvements. That includes being sure to provide access to technology and integrating technology into daily classroom instruction.”