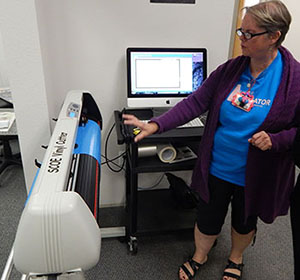 Maker Education is thriving in Sonoma County (and beyond), engaging learners of all ages in hands-on exploration across multiple academic disciplines. The Sonoma County Office of Education is helping to lead this movement towards a “learn by doing” approach in classrooms and schools. Below is only a partial list of the ways in which SCOE is actively supporting the growth of Maker Education:

The Summer Institute also served as the official opening of the SCOE Design Lab, an 800 square foot collaborative learning environment featuring digital manufacturing tools such as a laser cutter, 3d printers, and a vinyl cutter. The makerspace, one of the first of it’s kind in a county office of education, can also be used for multimedia production, electronics and microcontrollers, and simple hands-on projects. Along with workshop offerings in the space, SCOE staff has hosted multiple groups from around the county and state looking to create a similar space for making, innovating, collaborating, and creating.

SCOE staff members have been invited to set-up makerspaces and present on the benefits of Maker Education at multiple regional and statewide conferences in an effort to introduce the power of making to a broader audience. These conferences include:

SCOE Educational Support Services(ESS) team members are collaborating with other SCOE departments to expand teachers’ understanding of Maker Education. These collaborations include:

Given all of this momentum and energy surrounding Maker Education, SCOE is excited to announce that this summer it will be hosting reMAKE Education: A National Maker Summit for Educators. Educators and leaders in the Maker Movement will descend on Sonoma County from August 3-5 for three days of making, learning, and networking at 180 Studios, a 15,000 square foot makerspace under development in Santa Rosa. For more information about this exciting event, please visit remakeeducation.org.