Conference on maker education kicks off 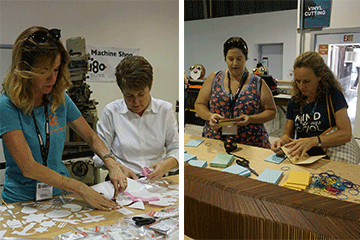 A first-ever conference on maker education started with a bang on Wednesday, August 3 with world-class speakers and plenty of making.

The one-of-a-kind event, the reMAKE Education Summit, drew more than 250 teachers, administrators, makers, and innovative businesses from around Sonoma County, the state, and the nation. Many were leaders in the make movement and maker education, while others were brand new to the idea and looking how to incorporate concepts into their classrooms.

The making started almost immediately: As attendees arrived at the conference (being held in the brand-new, community makerspace called 180 Studios in Santa Rosa) they filtered into an open hall and drifted among stations of maker activity where they had the opportunity do to things like design their own conference t-shirts using vinyl patterns and a heat press, create their own flashlight, and build a circuit.

One participant—Santa Rosa first grade teacher Clare Mackenzie—happily peeled away a vinyl design for her T-shirt on Wednesday afternoon. "This is my first experience with making," she said, adding that her small school sent all six of its teachers to the event. Two teachers from the school recently earned a maker education certificate through a program sponsored by Sonoma State University and the Sonoma County Office of Education, and that has galvanized the school integrate the maker education for all its students, she said.

Ms. Mackenzie shared that she was "a little intimidated" to be surrounded by equipment she wasn't familiar with and expert makers. "But it's also very fun," she said. "It's a mix of people with different skill levels, and there are experts you can ask for help. I'm looking forward to bringing what I learn back and sharing it with my kids."

After the networking and making session, two keynote speakers kicked off the conference. First, Dale Dougherty, founder of Maker Media and one of the founders of the worldwide maker movement, spoke of how giving students the power to ask questions, create, and solve their own problems can engage those who might otherwise feel lost at school. "I believe the most compelling thing about making is not just the fact that you're using your hands — it's having an idea in your head and working it out with your hands," he said.

Then Walt Engelund, NASA Langley's Director for Space Technology and Exploration, talked about the history of his lab from the Wright Brothers to Mars, and the key role that a maker mindset played in that history.

The summit comes at a time when the make movement is taking off around the world and its power as an educational tool is being recognized in classrooms around the country as well as at the White House. The goal was to train and inspire more than 250 educators from all grade levels and subject areas in how to bring the maker movement to classrooms around Sonoma County, the state, and the nation.

SCOE has long been a leader in the maker education movement, helping to start a Make Certificate program for teachers at Sonoma State University, hiring its own, full-time Curriculum Coordinator for Maker Education (Casey Shea), and building a Design Lab where local teachers can learn the basics and become acquainted with tools like laser cutters, 3D printers, and more.

Dan Blake, Director of Innovation & Partnerships at SCOE, said, "There is incredible energy surrounding the maker education movement, both locally and around the state and country. This summit is intended to capitalize on that energy by bringing educators together with leaders in the maker movement to learn alongside one another, share innovative ideas, and build professional networks.”

Hands-on sessions were designed to be nothing like the usual abstract conference material. Meant to engage and empower teachers (and their students in turn), they included topics like: building electric vehicles in the classroom; using video apps to tell stories; why girls like engineering; and circuitry and robotics. Attendees also had the chance to tour innovative Bay Area companies and local school makerspaces.

“We wanted attendees to be immersed in hands-on maker activities so that they can learn and understand for themselves the power of this approach to teaching and learning," Blake said.

To learn more about the classes and professional learning opportunities SCOE offers around making, visit scoe.org/designlab.