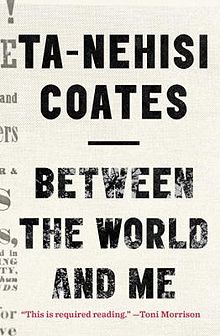 Ta-Nehisi Coates’ controversial best-seller “Between the World and Me” is the selection for Sonoma County Reads this fall, with a series of events scheduled from September 26 through December 16.

Sonoma County Reads is a county-wide reading program, in which all who live in Sonoma County are encouraged to read the same book in order to foster community and awareness of reading. “Between the World and Me” is the winner of the 2015 National Book Award for nonfiction, and was a finalist for the Pulitzer Prize, the National Book Critics Circle Award, and was named one of the top ten books of the year by publications ranging from the New York Times Book Review and the San Francisco Chronicle to O: The Oprah Magazine and Library Journal. The book was hailed by Toni Morrison as “required reading,” a bold and personal literary exploration of America’s racial history by “the single best writer on the subject of race in the United States.”

For the first time, this year’s selection will be a joint effort of the Sonoma County Library, Santa Rosa Junior College, Sonoma State University, Creative Sonoma, KRCB North Bay Public Media, the Sonoma County Office of Education (SCOE), and Copperfield’s Books.This broad coalition of libraries, educational institutions, and arts-focused groups will collaborate to sponsor a range of events and classes focusing on the book.

SCOE is suggesting some children's and young adult titles to complement the selection for adults, including:

At SSU, staff and faculty are facilitating a book dinner and discussion, as well as a “Wikipedia Edit-a-Thon” related to topics in the book. Sonoma County Library plans a broad range of activities, ranging from book discussions to community panel presentations, along with film showings to tie in with the subject matter.

SRJC has selected the book both as its “SRJC Reads” titles and its “Work of Literary Merit,” which is read as part of several course offerings in varied disciplines. The campus is planning a read-aloud of the book, and a letter-writing campaign, as well as a broad spectrum of artistic, literary, research, and participatory tie-in events for the entire campus community.Readers can find copies of the book at any Sonoma County Library branch, as well as at the SSU and SRJC libraries, or at your favorite bookstore.The Sonoma County Library has held a county-wide read for 13 years, beginning in 2003 with The Call of the Wild. For this year’s Sonoma County Reads, Library staff reached out to connect with faculty at SRJC and SSU, and actively recruited other organizations as partners in the effort. Please visit the Sonoma County Reads Facebook page to see the latest offerings: https://www.facebook.com/sonomacountyreads/.