Congratulations to Hidden Valley Elementary School Teacher Paul Drake, winner of the Teacher of the Month award sponsored by the Sonoma County Office of Education (SCOE), Mix 104.9, and Community First Credit Union (CFCU). This award, new in 2016, honors one of Sonoma County's most outstanding teachers each month from October through May. 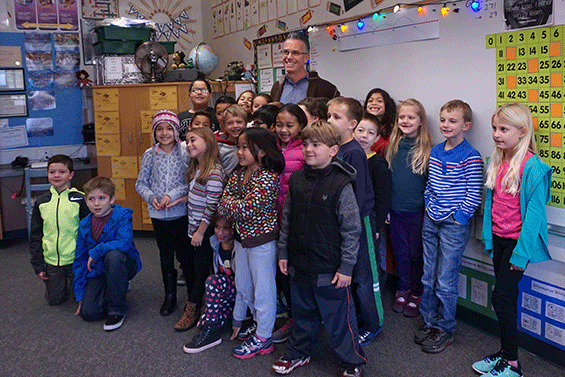 In November, the second month of the contest, nearly 100 nominations were received. It was a difficult choice, as many of nominations were incredibly moving. Once again, it was very clear that Sonoma County has a wealth of amazing teachers. However, Mr. Drake, who teaches second grade at Hidden Valley Elementary School in Santa Rosa, stood out for the numerous glowing nominations he received from parents and colleagues—nominations that described a man who made an incredibly positive impact on his young students' lives.

Several parents spoke of how Mr. Drake has instilled self esteem in their young child. One said that Mr. Drake had given her overweight child the courage and confidence to walk with head held high. She had never seen her child's grades as wonderful as they were in Mr. Drake's class, she added. Another parent wrote, "Mr. Drake goes above and beyond to meet the needs of his students. He is kind, thoughtful, caring, tough, engaging, funny, serious, and loved by all. He went out on a limb and fundraised for stand-up desks for his classroom and demonstrates on a daily basis the need to appreciate the whole child—believing that social/emotional growth is important too." Mr. Drake is widely loved and respected, according to his school's principal, and works long hours on evenings and weekends to ensure his students receive the best education possible. 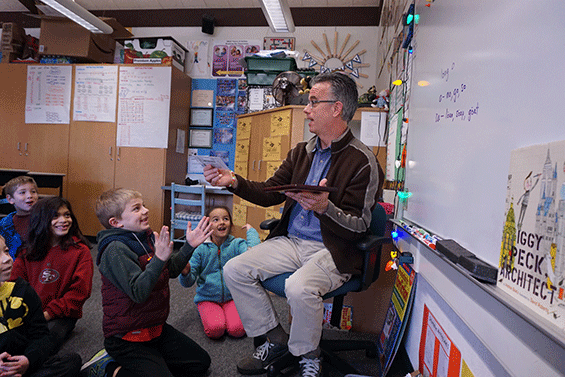 When SCOE and Mix 104.9 surprised Mr. Drake with the award in front of his class, all his students cheered and many hugged him.

Dr. Herrington encouraged anyone who knows a wonderful teacher to submit their name, along with an explanation of why they deserve the honor, at the Teacher of the Month page on Mix 104.9. He also encouraged the public to stay tuned for the next winner, who will be announced in January.