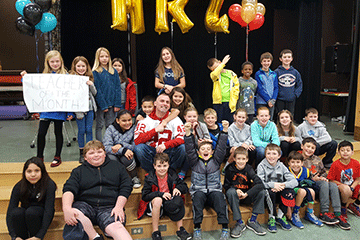 Mr. Ed Zeidler, fourth grade teacher at Penngrove Elementary, received the Sonoma County Teacher of the Month award for January in a surprise presentation met with wild cheers from his students, teachers, and parents. This award is sponsored by the Sonoma County Office of Education (SCOE), Mix 104.9, and Community First Credit Union (CFCU). This award, new in 2016, honors one of Sonoma County's most outstanding teachers each month from October through May.

In January, the third month of the contest, more than 80 nominations were received. Once again, it was a difficult choice, as many of nominations were incredibly moving. However, Mr. Zeidler—or Mr. Z, as his students know him—stood out for the numerous glowing nominations he received from parents and students.

The nominations described a teacher who is caring, patient, and fun, who plays with his students over recess and holds a homework club to help them with difficult math homework. He is one of "those teachers," wrote one parent, adding that his former students often come back just to hang out in his class.

His class is always open for kids to find warmth on cold mornings and games to play if they don't want to play outside," wrote another parent, adding, "he truly cares about each child and it reflects in every area."

When SCOE and Mix 104.9 announced Mr. Zeidler's award in front of the Penngrove Elementary student body, the multi-purpose room erupted in spontaneous cheers of "Mr. Z! Mr. Z!" Mr. Zeidler thanked his students and colleagues for helping him to be the teacher he is. Smiling, he said the surprise had made his day, his month, and his year.

Dr. Herrington encouraged anyone who knows a wonderful teacher to submit their name, along with an explanation of why they deserve the honor, at the Teacher of the Month page on Mix 104.9. He also encouraged the public to stay tuned for the next winner, who will be announced in February.