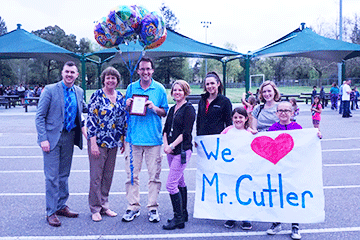 When an assistant superintendent asked to meet with him about a school board presentation on March 15, Mr. Josh Cutler didn't suspect that a big surprise was awaiting him. But when he left the meeting and started walking across the blacktop back to his classroom, this is what he saw: The entire student body gathered together, some students holding hand-painted signs that said "We (heart) Mr. Cutler." Then everyone started cheering and singing, "for he's a jolly good teacher."

This is how Mr. Cutler, a well-loved kindergarten teacher at Evergreen Elementary in the Cotati-Rohnert Park Unified School District, received his Sonoma County Teacher of the Month honor. This award is sponsored by the Sonoma County Office of Education (SCOE), Mix 104.9, Community First Credit Union (CFCU), and Platinum Chevrolet. This award, new in 2016, honors one of Sonoma County's most outstanding teachers each month from October through May.

In February, the fourth month of the contest, more than 80 nominations were received. Once again, it was a difficult choice, as many of the nominations were incredibly moving. However, Mr. Cutler stood out for the numerous glowing nominations he received from parents and students.

The nominations showed what a fun, patient, caring, and dedicated teacher he is for his young students. Among other things, he's organized a Walk-a-thon and a Halloween dance, he's let kids slime him for a good cause, he is a member of the PTA, and on a daily basis gives each student a special welcome when they come to class. One parent called him a "true inspiration" while another one said he is her son's "favorite reason for going to school every day."

One student wrote: "I think Mr. Cutler of Evergreen Elementary School of Rohnert Park, should be teacher of the month. He makes us laugh when he reads Dr. Seuss books to us and we sing songs about counting math numbers. My Daddy says it's okay that he's a Dodgers fan because he's a great teacher."

Mr. Cutler acknowledged he was really surprised by the presentation, which his family was able to attend as well. "Thank you guys so much. I really, really, really appreciate this. I would say this is for all of us at Evergreen because all our teachers are so amazing," he said.

Dr. Herrington encouraged anyone who knows a wonderful teacher to submit their name, along with an explanation of why they deserve the honor, at the Teacher of the Month page on Mix 104.9. He also encouraged the public to stay tuned for the next winner, who will be announced in April.