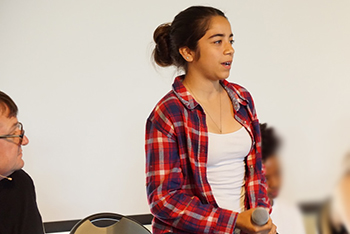 The Sonoma County Office of Education (SCOE) on June 13 hosted a powerful final meeting of the Restorative Culture Collaborative (RCC). The RCC was a year-long effort to help local schools build communities that are grounded in empathy, equity, and student engagement.

The event was held at Heron Hall at the Laguna de Santa Rosa. The dedicated educators present, who represented more than 20 middle and high schools from around the county, were inspired by the keynote speaker, Becky Margiotta. She is co-founder and president of The Billions Institute, whose mission is to solve the world’s most pressing problems in the next 20 years. She spoke about how the educators can help their colleagues overcome skepticism over new ways of doing things and engage their community in new initiatives. She highlighted the importance of questioning one's own assumptions,recognizing people's efforts, and fostering a shared sense of identity over a common cause. 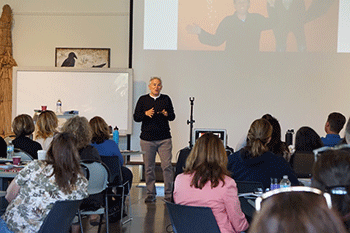 The group also heard from a panel of six students who benefited from or been involved with restorative practices at their schools. These students spoke from the heart about a time when school really had an impact for them. One high school student described a teacher who went above and beyond to help her master German, while another high school student spoke of being pushed outside his comfort zone as a "nerd" when he was appointed to lead a class project. He found that he could work with the "popular students" and "class clowns" and that the other people in the class "weren't as bad as I thought they were."

A middle school student spoke about how empowered he felt upon entering middle school, where teachers gave him much more trust and autonomy than he'd had in elementary school. "My teachers see me as a smart, nice, sweet kid, and I'm like, 'ok!'" he said. Another student told a story about how a teacher helped her focus on her coursework, despite her inclination as an outgoing person to talk in class rather than get coursework done. The teacher helped her realize she needed a plan to succeed in school. 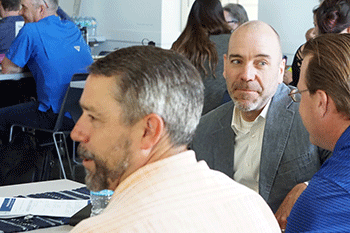 The members of the collaborative left with concrete plans and ideas for how to continue the work at their school sites in the years to come. They also received $4,000 in site implementation funds from the Sonoma County Board of Supervisors to support their efforts around fostering a school community grounded in empathy, equity, and engagement.

“The thing that impresses me most is the tremendous and palpable growth we have seen individual school sites make throughout this effort,” said Jessica Progulske, Work-Based Learning Coordinator at SCOE, who heads the collaborative. “Seeing a team of educators that includes campus supervisors, teachers, counselors, and administrators sit around a table and discuss how they might best and most holistically support students is a terrifically inspiring thing to witness. It reinforces the idea that leadership is not always limited to those holding official leadership positions in an organization. Each one of the RCC participants, regardless of his or her role/position, stepped up in support of their students this year.”

ABOUT THE RESTORATIVE CULTURE COLLABORATIVE

The effort kicked off last June with teams of teachers, counselors, community partners, principals, campus supervisors/ student advisors, and others gathering for a three-day introduction to concepts such as how trauma can impact a child’s ability to learn; how to build positive school culture based on student engagement (Restorative Practices); and the importance of engagement as a factor in equitable teaching. Teams from more than 20 Sonoma County schools representing 11 districts attended, with more than 80 people participating.

The initiative stemmed from recommendations by the CALLE Task Force, created after the fatal shooting of Santa Rosa student Andy Lopez, and was funded by a $100,000 grant from Sonoma County Board of Supervisors, with $80,000 going directly to schools. During the year, school teams of up to seven members took what they learned during RCC meetings and applied them at their school sites, with ongoing assistance from SCOE.