Teacher of the Year winners honored at Administrators' Kickoff

The 2017 Sonoma County Teacher of the Year honoree Tom Griffin and runner-up Andy Mitchell were recognized at the Administrators' Kick-Off, an annual gathering of Sonoma County school trustees, superintendents, principals, and other educational leaders. The event, hosted by the Sonoma County Superintendent of Schools, Sonoma County Board of Education, and Sonoma County Association of School Administrators, also featured a riveting and galvanizing account of the power of hands-on, meaningful learning to transform young lives. Teacher Fredi Lajvardi shared the first-hand account of how a group of disadvantaged teenagers overcame incredible odds to become national robotics champions.

Teacher of the Year

A teacher described as “an educational renaissance man,” “the most influential educator I have ever met,” and “a champion of educational equity and a tireless advocate for all students’ equal access to opportunity and growth“ was awarded with the county's top teaching honor at the beginning of SCOE's Administrators' Kick-off, where roughly 120 school leaders were gathered to recognize him.

Casa Grande High teacher Thomas Griffin was selected in February as the Sonoma County nominee for California Teacher of the Year by SCOE. "When he works with kids, they feel like he's nowhere but working directly with them. He's engaged, he's present, he has a passion for working with the English Learner population, and couldn't represent any better what we're all about in Sonoma County," said Petaluma City Schools superintendent Gary Callahan when presenting Mr. Griffin.

Mr. Griffin called it "a wonderful honor" and said it was the work of thousands of people in schools, districts, and county offices that made his work possible. He joked about the many things educators can find to disagree over, but urged them to find common ground in a calling to serve children. "We're all in it because we want the best possible experience for our students," he said. 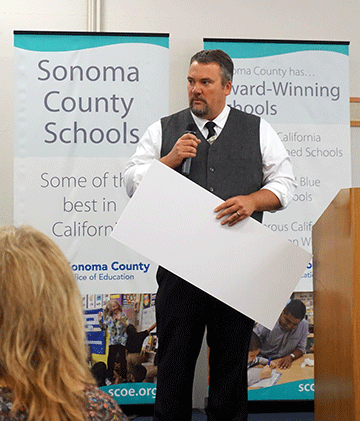 Andy Mitchell of Sonoma Valley Unified School District was named runner-up in the Teacher of the Year contest. A photography teacher, he was recognized for his “astonishing” work ethic and the creation of a “powerhouse” award-winning photography program, as well as the difference he has made in the lives of his students. Mr. Mitchell is the recipient of a $2,000 award provided by Community First Credit Union.

"We really have one of the best jobs in the world, and I am inspired not only by my colleagues but really by my students," Mr. Mitchell said. He described how the beginning of the school year can be scary, but "you look at new students and you see potential, and you carry that potential throughout the entire school year, and you're surprised and excited and happy every year and that's why you do this job." 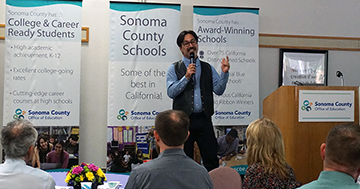 Following the celebration of the Teacher of the Year recipients, a teacher from an inner-city school in Phoenix, Arizona took the stage to tell the incredible story of how a team of undocumented students put together a low-budget robot that beat out MIT and other elite colleges in an underwater robotics competition. Fredi Lajvardi, whose story is now the subject of the feature film Spare Parts as well as the documentary Underwater Dreams, inspired Sonoma County school leaders with his account of how his students overcame enormous odds to put their school on the map. He described how their accomplishments inspired future generations of underprivileged students to succeed.

"When one student shows it can be done, all students see a path forward," he said.

He said teachers can make learning meaningful for students by connecting the content to hands-on activity as well as social relevance. He added that despite all the changes in education, the most important thing for a teacher to do is stay in touch with his or her human side and make lasting connections with students.

SCOE thanks the Sonoma County Board of Education, Sonoma County Association of School Administrators, and Community First Credit Union for their support of this event.