Final results for the 2016 Smarter Balanced Summative Assessments, released Aug. 24, showed that Sonoma County made steady improvement over 2015, the first year of testing under the new system. In Sonoma County, average student scores improved for both ELA and math. In English, the percent of students meeting or exceeding the standard rose from 46 to 49 percent. In math, the percent rose from 33 to 36.

This year marks the second batch of results from the Smarter Balanced Assessment Consortium (SBAC) test, part of the California Assessment of Student Performance and Progress (CAASPP). It replaces the old California Standards Test (CST), which was part of the California Standardized Testing and Reporting (STAR) system. It is designed to measure student learning under California’s content standards rolled out in 2013. Results of the two exams should not be compared because they measure a different set of skills and knowledge.

However, results can now be compared between the 2015 and 2016 SBAC testing years to see how students are progressing under the new system. 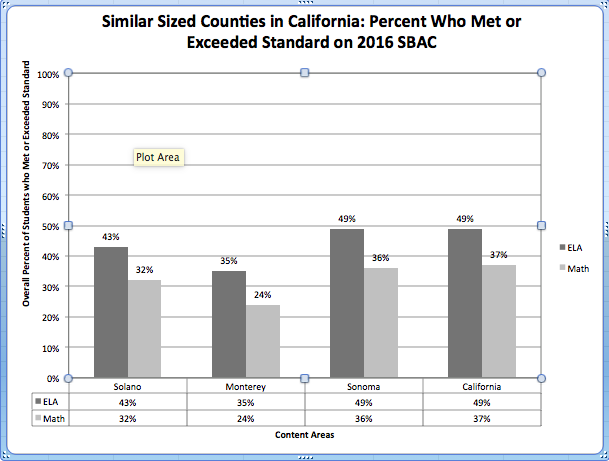 Sonoma County students performed on par with the average student statewide in ELA, with 49 percent of students meeting or exceeding the new English standard. Meanwhile, 36 percent of Sonoma County students met or exceeded the mathematics standard, compared with 37 percent statewide. Sonoma County did well in comparison with two counties with similar student population size and demographics—Solano and Monterey. Sonoma scored higher in both ELA and math compared with these counties.

The SBAC test is administered in a new way, replacing the old fill-in-the-bubble method with computerized exams that require students to be fluent in technology. Dr. Herrington emphasized that these tests are just one measure of student performance along with local measures such as projects, portfolios, interim assessments, and student progress reports. Students were tested in English language arts and mathematics. For each grade level and subject area, students received a score ranging from around 2000 to 3000. The overall scores fall into one of four achievement levels: Standard Exceeded, Standard Met, Standard Nearly Met, and Standard Not Met

Dr. Herrington emphasized the need to continue addressing the achievement gap. He said the Sonoma County Office of Education and local school districts can do so by continuing to adjust curriculum and teaching to meet students’ needs, as well as by conducting more frequent checks of student understanding and personalizing learning more.

He also encouraged parents seeking to understand the new tests to visit scoe.org/sbac, where they can take a sample test.