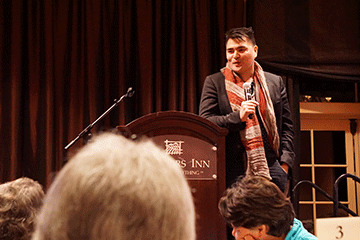 At a dinner honoring school board trustees throughout Sonoma County, Pulitzer Prize-Winning Journalist Jose Antonio Vargas spoke about a timely topic: Equity and the Undocumented Student.

Trustees were also energized by a thought provoking presentation by Vargas, who has become one of the best-known undocumented immigrants in the United States. Vargas told the story of how he immigrated with his family to the U.S. (from the Philippines) when he was 12 years old and didn't learn until years later, when he tried to get his driver's license, that his immigration documents had been forged and that he was living in the country illegally.

He highlighted the power of teachers to change lives, relating how his high school superintendent, along with other educators, guided him through high school and set him on a path toward great success. Their steady and reaffirming presence in his life helped him through tumultuous years where he was trying to make sense of his place in the United States and overcome the absence of a strong father figure in his own family.

"I would be nothing without the investment, commitment, and sheer humanity of all these teachers," he said. He also urged educators, many of whom struggling to know how to respond to national immigration and deportation orders that impact their students and students' families, to try to see past the politicization of the issue to remember the humanity of their students. "My teachers didn't need passports to know I was one of their own," he said. He added that teachers can help others move beyond the extreme politicization by telling stories of their students. "The role of teachers is so important," he reiterated. "You guys are the neutral ground."