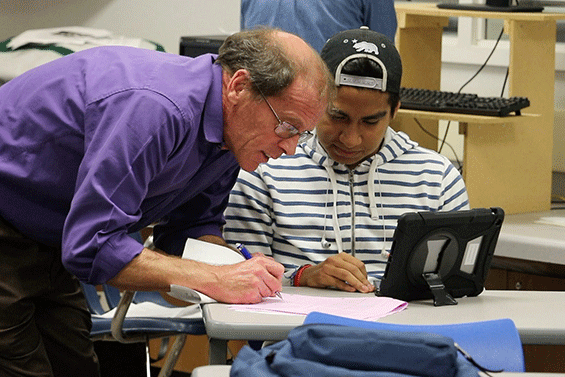 A teacher described as “an educational renaissance man,” “the most influential educator I have ever met,” and “a champion of educational equity and a tireless advocate for all students’ equal access to opportunity and growth“ has received the county’s top teaching honor.

Casa Grande High teacher Thomas Griffin has been selected this February as the Sonoma County nominee for California Teacher of the Year by the Sonoma County Office of Education (SCOE) for “his range of teaching experience, educational philosophy and approach, his adaptability in creating programs and instruction to respond to students’ needs, and his commitment to equity and the success of each of his students.”

In recognition of this achievement, Griffin will receive a $3,000 award from Community First Credit Union, season tickets to the Santa Rosa Symphony, and will work with SCOE’s Teacher of the Year coordinator to apply for the 2017-18 California Teacher of the Year award.

Griffin, an educator for 26 years, currently teaches advanced placement macroeconomics and English language development (ELD). He is also an English language resource teacher. “He can help you fix a car, teach calculus, discuss Thomas Aquinas, and explain cogently the history of secondary education,” wrote his colleague Todd Siders. Students and faculty alike described a man whose dedication to students drove his commitment to teaching.

“He cares about you, he’s not just teaching a subject,” said one of his students, Andrea. “Sometimes he gives you lessons about life. It’s really cool to see that a teacher cares for you.”

Griffin is described a mentor and leader who helped guide Casa to its current, exemplary model for serving English learner students in an inclusive and integrated way. “He has been a visionary educator who, over the last decade, has led the transformation of the school’s ELD program—a systematic change which has not only benefitted Casa’s second-language learners and their families, but has had the impact of making Casa a far more inclusive, diverse, and engaging campus,” wrote Principal Eric Backman in his nomination.

“The application described an exemplary educator who is making a significant difference in the lives of English Learners in particular and a classroom where students excel,” said Steve Herrington, Sonoma County Superintendent of Schools in his letter notifying Mr. Griffin of the award. The runner-up award went to Andrew Mitchell, a photography teacher at Sonoma Valley High School. His nomination described a man with “astonishing” work ethic, whose passion for for teaching and care for his students as individuals has led to the creation of a “powerhouse” award-winning photography program.

Mr. Mitchell is the recipient of a $2,000 award provided by Community First Credit Union. “At SCOE, we seek to inspire the local educational community by honoring and telling the stories of our most outstanding teachers. I can’t imagine better models for rigorous, student-centered teaching than this year’s winner and runner-up,” Herrington said.

Full nomination forms are available to the media upon request.