ieSonoma is a partnership of educational institutions and the larger community dedicated to exploring the research, theory, and practice of transforming education for the 21st century. The partnership was initiated by SCOE in collaboration with founding partners Sonoma Country Day School and Sonoma State University. It is aligned to the Cradle to Career Sonoma County goal of ensuring that every child succeeds academically. Learn more at iesonoma.org.

ieSonoma 2019 will serve as the launch event for an exciting new initiative aimed at increasing access to engaging science, technology, engineering, arts, and mathematics (STEAM) opportunities for all students! The STEAM Champions mission is to support a framework for educators to highlight STEAM activities for students of all ages and abilities. The initiative was created to document and promote evidence of student success in STEAM activities and models of equitable access amongst all student populations. STEAM Champions is a platform to help teachers develop their beliefs about student potential in STEAM, resulting in collaborative communities sharing equitable opportunities to access these valuable experiences.

The 2018 event featured keynote speaker Todd Rose. Dr. Rose is the Director of the Mind, Brain, and Education program at the Harvard Graduate School of Education, where he leads the Laboratory for the Science of Individuality, as well as Associate Faculty at the Wyss Institute for Biologically Inspired Engineering. He is also the co-founder of Populace, a non-profit organization that promotes the principles of individuality in work, school, and society. Todd is the author of The End of Average. Todd Rose was joined on the program by an inspiring group of local young innovators.

Sir Ken Robinson delivered an empowering keynote address at ieSonoma 2017 that urged educators to tap into students' natural love of learning and find as many ways as they can to foster creativity. He spoke to a nearly sold-out crowd of around 700 on Monday, June 12, 2017. Robinson was the keynote speaker at the inaugural ieSonoma event in 2013, and he returned to commemorate ieSonoma's 5th anniversary. In addition to Robinson’s presentation, ieSonoma featured local student innovators, who shared their powerful stories in a series of short talks. Their stories were meant to inspire educators to create more opportunities for students to pursue their own unique interests.

Called “one of the world’s elite thinkers on creativity and innovation” by Fast Company magazine, Sir Ken Robinson has received numerous awards and recognitions for his groundbreaking contributions. Videos of his famous talks to the prestigious TED Conference are the most viewed in the history of the organization and have been seen by an estimated 300 million people in over 150 countries. He was included in Thinkers50 list of the world’s leading business thinkers and has been named one of TIME/Fortune/CNN’s Principal Voices. In 2003, he received a knighthood from Queen Elizabeth II for services to the arts. His latest book, Creative Schools: The Grassroots Revolution That’s Transforming Education (Viking, 2015), written with Robinson’s trademark wit and engaging style, includes groundbreaking research and tackles the critical issue of how to transform the nation’s troubled educational system.

Benjamin Zander is the conductor of The Boston Philharmonic Orchestra and the Boston Philharmonic Youth Orchestra and a guest conductor around the world. His latest recording, Mahler's 2nd Symphony, was nominated for a Grammy in 2014. Throughout his career, Mr. Zander has had a passion for teaching. In 1967, Mr. Zander joined the faculty at New England Conservatory, where he taught an interpretation class, conducted the Youth Philharmonic Orchestra, and conducted the conservatory orchestras. For 30 years he was the Artistic Director of the joint program between New England Conservatory's Preparatory School and The Walnut Hill School for the Performing Arts in Natick, Massachusetts. Mr. Zander is one of the most sought after speakers in the world. His partner Rosamund Zander and he have collaborated on a best-selling book, "The Art of Possibility," and his now famous TED-talk has been viewed over 7.5 million times.

Dr. Ainissa Ramirez is a science evangelist who is passionate about getting the general public excited about science. She co-authored Newton’s Football: The Science Behind America’s Game (Random House); and authored Save Our Science: How to Inspire a New Generation of Scientists (TED Books). Before taking on the call to improve the public’s understanding of science, she was an Associate Professor of Mechanical Engineering & Materials Science at Yale University. Technology Review, the magazine of the Massachusetts Institute of Technology (MIT), named her as one of the world’s 100 Top Young Innovators for her contributions to transforming technology. She has been profiled in The New York Times, Fortune Magazine, CBS News, Inside Edition, Fox News, CNN, NPR, ESPN, Time Magazine as well as scientific magazines (Scientific American and Discover Magazine).

ieSonoma 2015 was held over two days at two outstanding venues: the Jackson Theater at Sonoma Country Day School and Weill Hall at Sonoma State University's Green Music Center. Attendees heard from three dynamic keynote speakers whose personal stories of building successful organizations out of their passions to see change in the world served as an inspirational call to action for all of us to be audacious in our goals and our work.

Dan Pallotta is an entrepreneur, author, and humanitarian activist who is changing the way the public thinks about charity and change. He is best known for creating the multi-day charitable event industry, and a new generation of philanthropists, with the AIDS Rides and Breast Cancer 3-Day events. His 2013 TED Talk, viewed by 3.4 million people, argued that “the way we think about charity is dead wrong.”

Emily Pilloton is an educator, architect, and humanitarian activist who believes that design and building can excite learning and citizenship. She developed and is now teaching a design-build curriculum called Studio H that engages the minds and bodies of high school students while bringing smart design and new opportunities to the poorest county in North Carolina.

Adam Braun is a best-selling author, entrepreneur, philanthropist, and founder of Pencils of Promise, a non-profit organization that builds schools and increases access to education for children in the developing world. His book, The Promise of a Pencil, describes how an ordinary person can create extraordinary change.

The 2014 ieSonoma event focused on the changing demands of the 21st century and how our community, and its schools, must respond to meet those demands. Two keynote speakers were featured, Dr. Sugata Mitra and Nirvan Mullick. A discussion on “Design Thinking in Education” opened the event with panelists Greg Bamford, Annette Diefenthaler, Kristen Swanson, and Kami Thordarson. See a video of the panel discussion.

Dr. Sugata Mitra is Professor of Educational Technology at the School of Education, Communication and Language Sciences at Newcastle University, England. His 30 years of research spans a wide range of disciplines, but he has earned the greatest recognition for his creative experiment known as the Hole in the Wall, which showed that children can teach themselves and each other when they’re motivated by curiosity and peer interest. This work inspired the book and award-winning movie Slumdog Millionaire. Dr. Mitra received the 2013 TED Prize and was named one of the Top 10 Thinkers of 2013 by CNN.

Nirvan Mullick is a filmmaker, creative consultant, speaker, and entrepreneur. His animated short films have screened in festivals worldwide. In 2001, he began an ongoing collaborative experiment called The 1 Second Film, which was one of the first crowd-funded films. In 2012, he directed Caine's Arcade, an 11-minute film that became a viral phenomenon, receiving over 8 million views and sparking a global movement of ”cardboard creativity.” Mullick subsequently founded the non-profit Imagination Foundation to find, foster, and fund creativity and entrepreneurship in children. He has received the Dan Eldon Creative Activist Award and Innovation in Action award.

Over 700 teachers, administrators, university faculty, business people, and community leaders came together for an event that SCOE’s Educational Services department initiated and helped organize. ieSonoma, as this initiative is now known, was designed to start a community-wide dialogue about creativity and innovation in our schools. It was a huge success. 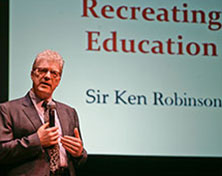 The event began with a panel discussion by leading Bay Area entrepreneurs, but the highlight was Sir Ken Robinson, a respected speaker known for his talks on education and creativity. You can see clips from his Sonoma County keynote at the ieSonoma website.

Among the attendees at the ieSonoma event were 19 school teams assembled with a goal of exploring the many facets of 21st century teaching and learning. The teams spent an entire week at SCOE focusing on how to begin integrating 21st century skills and increased innovation into their schools, classrooms, and curriculum. The dramatic changes that technology has made in our lives and the shift to Common Core State Standards have helped fuel a growing interest in these new ideas about education.

The success of ieSonoma is the result of strong community collaboration. Over 20 organizations helped sponsor the Sir Ken Robinson event, which was spearheaded by SCOE, Sonoma Country Day School, and Sonoma State University. The sponsoring organizations hope that their work will spark conversations and actions to enhance teaching and learning in Sonoma County schools, so that all students are prepared for success in our rapidly changing world.

Questions may be directed to: