The 4th annual California STEM Symposium, held October 10-11 in Anaheim, featured a strong Sonoma County flavor. For the second year, SCOE staff presented several talks and hands-on workshops and helped to set up and run the makerspace for over 3,000 attendees from around the state. Seven members of SCOE’s Educational Support Services team, along with several Sonoma County teachers and Dr. Carlos Ayala, SSU’s Dean of the School of Education, traveled to southern California to demonstrate and facilitate as participants engaged in a variety of projects, tools and activities highlighting the connections between STEM and maker education. 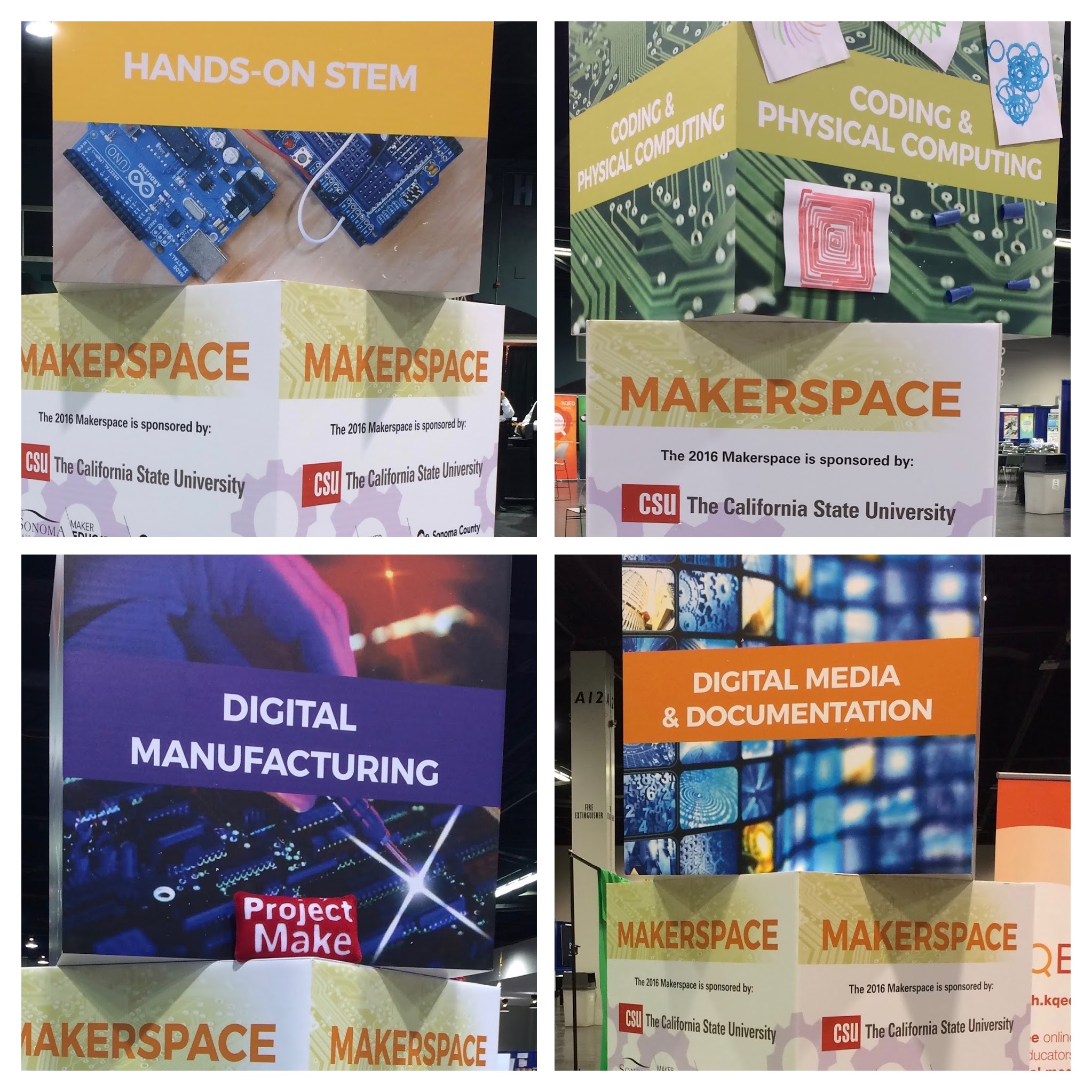 The 2,000-square foot makerspace, centrally located in the exhibit and dining hall, buzzed with excitement throughout the event. Four separate stations offered many opportunities for educators to engage in a variety of activities and to speak with experts and enthusiasts from across the state. Along with the Sonoma County contingent, the Hands-on STEM station featured a team from the Community Science Workshop Network, which brought a vanload of materials for attendees to make and take some of their amazing projects. The popularity of these standards-aligned, low-cost, easy-to-source-and-implement projects was evidenced by the perpetually packed tables. 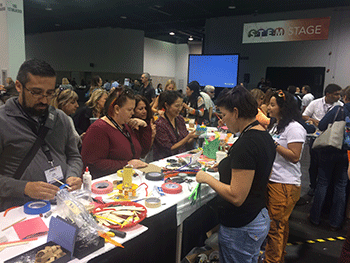 We were also fortunate to have expert help in the Coding and Physical Computing station from Ryan Jenkins, the Exploratorium’s Tinkering Studio Education Developer, who helped participants use ScratchX to connect Arduino microcontrollers to paper circuits along with using Beetleblocks to make some beautifully coded paintings using the Watercolor Bot. 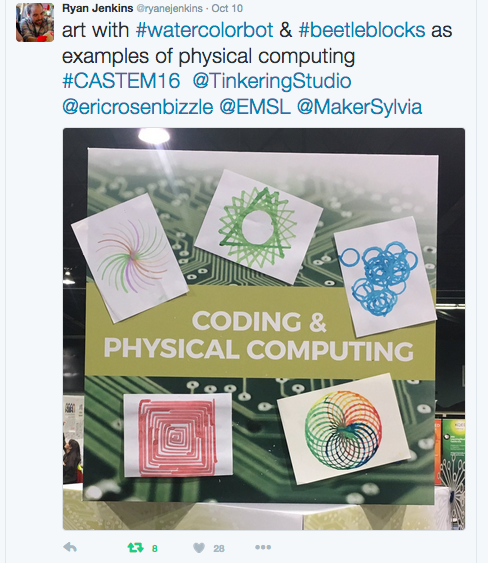 Another highlight of the Coding station was Roger Wagner demonstrating (and raffling off) his Hyperduino kits which make it extremely easy to add interactive light, sound and video elements to standard tri-fold presentations. 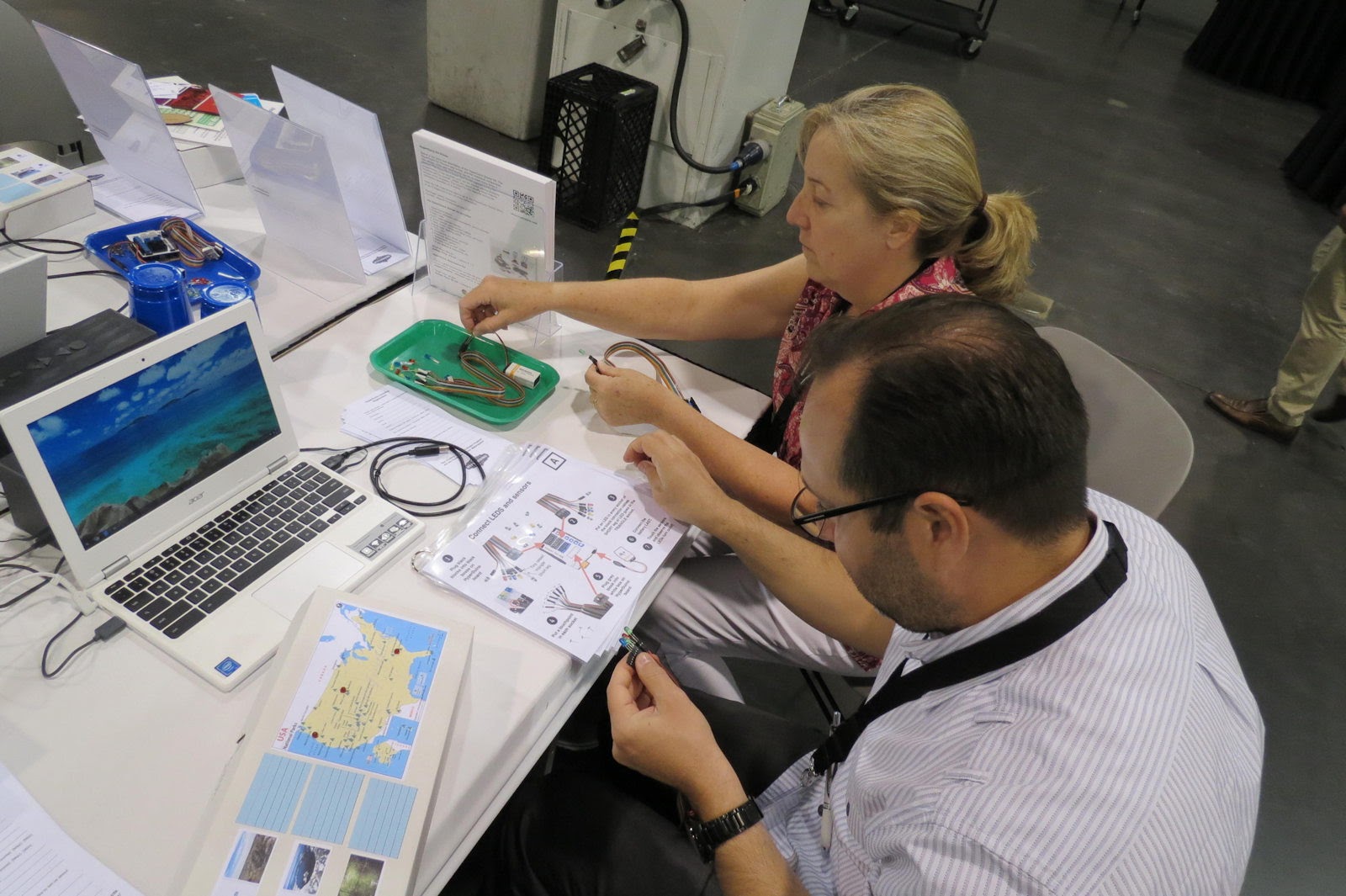 Anchoring the section was a three panel interactive installation featuring a Dia de los Muertos band that even the waiters couldn’t resist. 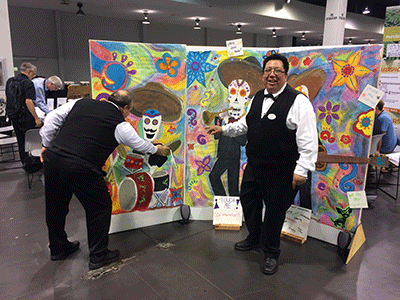 The Digital Media and Documentation station featured representatives from KQED Teach showing their new program to increase digital literacy and sharing, and Maker Promise, a collaboration between MakerEd and Digital Promise to train and connect maker educators through microcredentials. SCOE’s Matt O’Donnell showed some possible uses of low cost VR goggles that use free apps and the Raspberry Pi Twitter selfie camera got a workout. 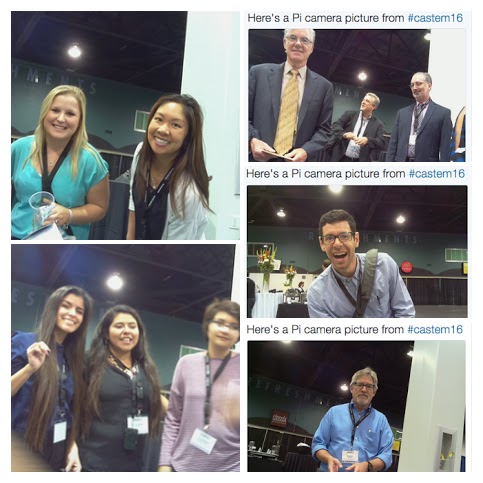 The Digital Manufacturing station featured reps showing the cool new HP Sprout computers and Dremel’s 3D printer along with the laser cutter, vinyl cutter, and Carvey from the SCOE Design Lab. Even State Superintendent of Public Instruction Tom Torlakson got into the maker action, carving a custom tile. 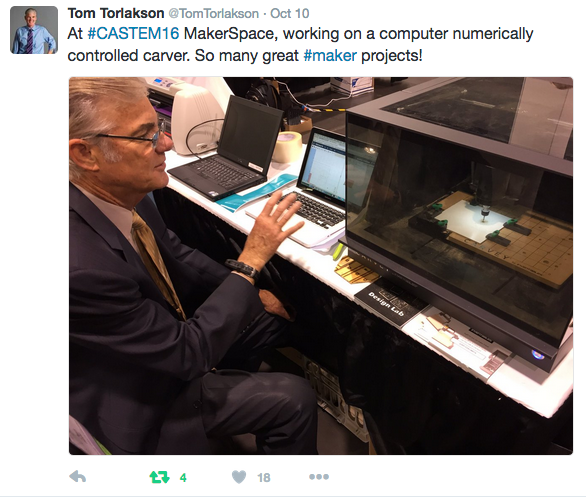 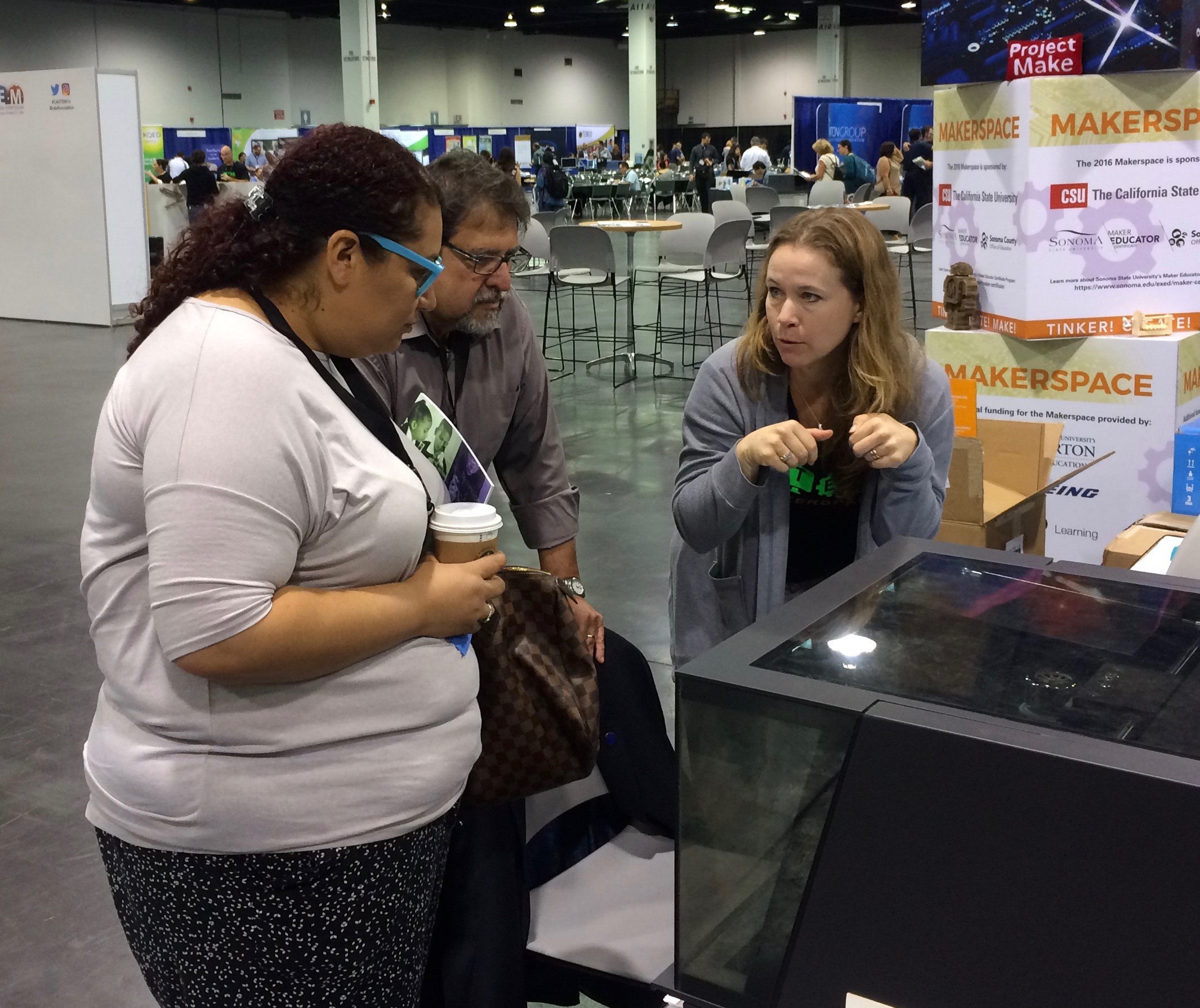 The next CA STEM Symposium will be in San Francisco on December 10-11, 2017 and we hope to once again be involved with the makerspace and to be able to include more Sonoma County and Bay Area educators and students in the effort. Stay tuned for more information! 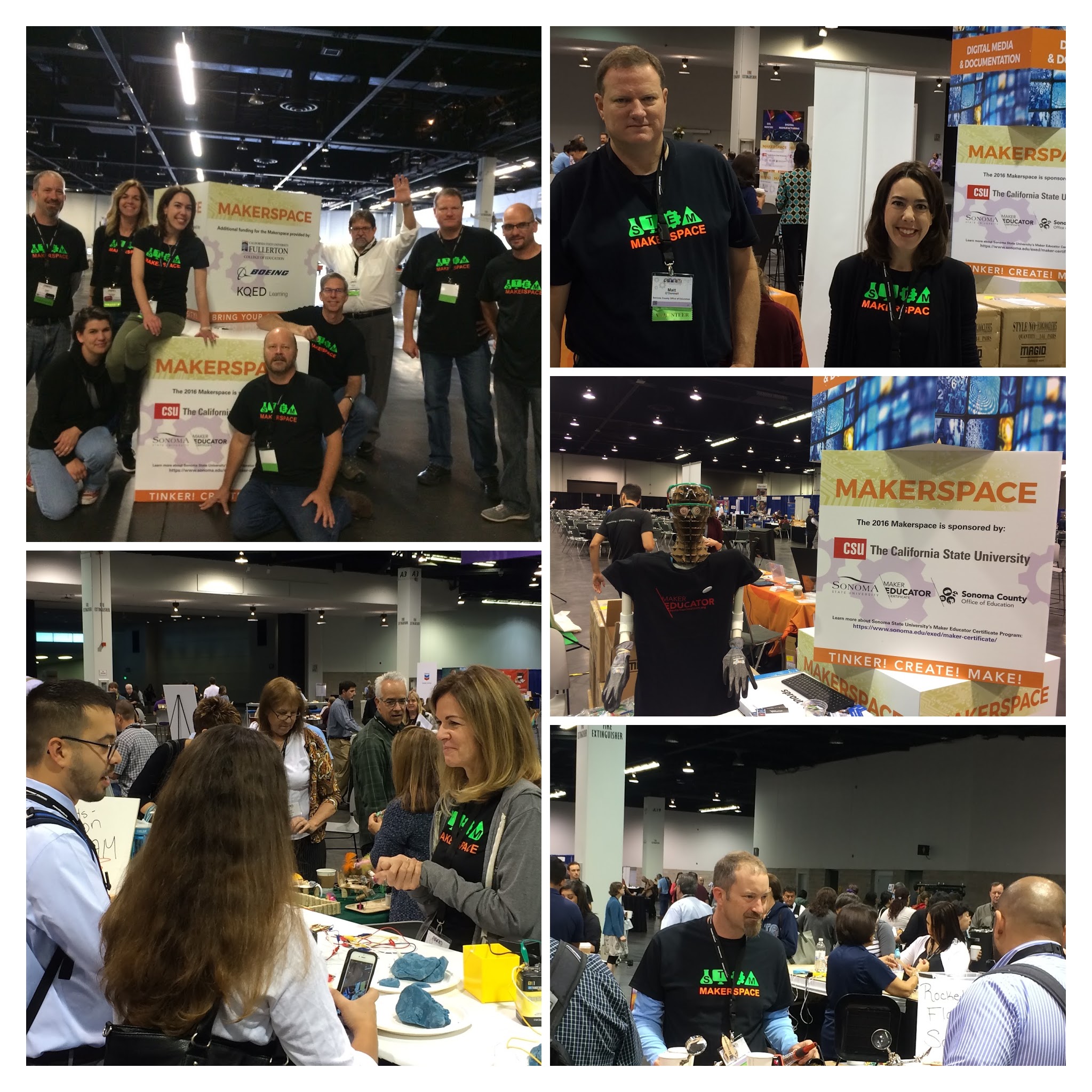