First graders at University Elementary in Rohnert Park—including a visually impaired student—got a chance to try out cutting-edge augmented and virtual reality tools meant to enhance classroom learning on May 14.

One student, after taking off the headset, exclaimed, "I thought I went so far away but I didn't go anywhere!"

Other activities included a maker station where students created their own robot and learned about space. 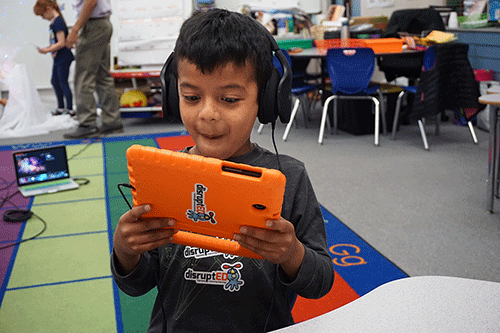 The one-of-a-kind experience resulted from a partnership between a department of the Sonoma County Office of Education (SCOE) serving visually impaired students, University Elementary, and disruptEd, which is described as an immersive publishing company. University Elementary uses an approach called project-based learning, which teaches curriculum through projects driven by student interest and real-world connections, to empower children to become active, curious, creative, and effective thinkers.

disruptEd’s tools are designed to be accessible to students regardless of learning level or disability, thanks in part to the efforts of Kurada and SCOE Teacher for the Visually Impaired Leslie Edmonds, who serves a student with visual impairments at University Elementary. Edmonds travelled to the SXSWedu conference in Austin, TX in March. While there, she connected with disruptEd and advocated for devices that serve students of all abilities—especially those with visual impairments. disruptEd was eager to collaborate. They have visited University Elementary and worked with the visually impaired student to ensure their product was accessible and features Universal Design for Learning (a flexible approach to instruction that accommodates different learning styles).

On May 14, the company returned to see how the product works for a larger group of students as well as to see how augmented and virtual reality in general works for younger grades.

At the end of the day's activities, a student said excitedly, ""I never thought a book could be alive!"

Kurada and Edmonds said they were very excited by this “amazing, collaborative venture” to bring 21st century learning to their students. 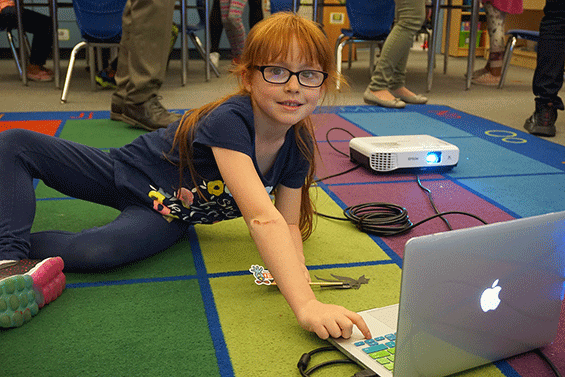