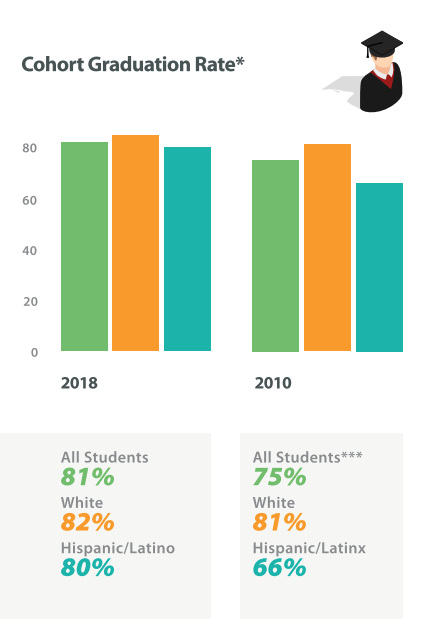 The Sonoma County Office of Education (SCOE) is celebrating a significant reduction in the “graduation gap” between white and Latinx students within the last decade.

At a time when the leadership group Los Cien has launched an initiative to build equality between white and Latinx community members, this milestone marks an example of how community partnerships can help address disparities.

“This is encouraging progress,” Herrington said. "While small disparities in the graduation gap remain, these graduation rates show that we're on the right track in Sonoma County with our efforts to graduate students college- and career-ready.” He believes that the progress is an example of collective impact, resulting from educators, government agencies, nonprofits, and community organizations coming together to improve educational outcomes for Latinx students.

Herrington also noted that the graduation rate for all students has increased steadily over the same time period, from 75-81 percent. This is in spite of the state recently implementing a more rigorous measurement tool for determining graduation rate.

Herrington cited efforts on the part of school districts and the county office to build student engagement as key to improving graduation rates. “We know that when kids are engaged in their education, they graduate,” he said.

These efforts are designed to make classroom learning more meaningful by connecting academics to students’ lives, interests, and career goals. Initiatives include the creation of 133 career pathway sections within high schools in partnership with the CTE Foundation of Sonoma County and the expansion of maker education in local classrooms. SCOE hired a maker education coordinator in 2016 and created a design lab to model maker education in 2015. There are now more than 28 school districts that have worked with SCOE to increase makerspace opportunities on their campuses.

Herrington also credited efforts aimed at providing additional resources to traditionally underserved student populations. This includes a partnership with 10,000 Degrees, a nonprofit organization which provides support and scholarships for disadvantaged high school students who may be the first in their families to go to college. More than 80 percent of four-year college students who participate in this program go on to earn college degrees.

More information can be found at the California Department of Education’s Dataquest website.