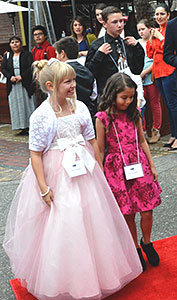 The Sonoma County Office of Education held the first annual Five-Minute Film Festival on March 16 at the 3rd Street Cinema in Santa Rosa. The event was an opportunity for students to demonstrate learning in a 21st century context and showcase their work in front of a community audience. To participate, students created short videos—no more than five minutes long—on the theme of “Growth.” They also made movie posters to highlight their films.

Over 110 videos were submitted. A judging panel selected the top 15 films and the 70 students who created them were invited to attend the Festival. The event mirrored the Oscars—students dressed for the occasion, entered the Theatre on a red carpet, and were photographed. Student filmmakers were seated at the front of the theatre and introduced as their films premiered. A panel of celebrity judges provided feedback on the films and gave the students pointers for future work.