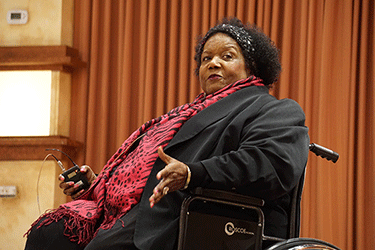 Dr. Jennie Snyder, SCOE's Deputy Superintendent of Educational Support Services, called equity "the civil rights issue or our time." Equity in education is about giving each student the specific and custom academic and emotional support he or she needs to succeed. This means a student coming from poverty or neglect might need more support than a student from an affluent or supportive family in order to achieve the same academic success.

Dr. Melba Beals #equity Equity At The Core "If you don't see the parts of me that are like you, then we are in trouble."

Civil rights icon Dr. Melba beals delivered the opening keynote with an inspiring presentation on the importance of teachers knowing their students and understanding where they come from. She spoke about her personal experience growing up in the south during the civil rights era and being one of nine children to integrate Central High School in Little Rock, Arkansas. She later received the Congressional Medal of Honor for her courage.

She talked about the importance of positive and caring role models in building her esteem and strong sense of self: "For me to emerge as a human being took a lot of my grandmother saying: you're beautiful." She said learned a lot about a child's needs from raising her own adopted twin sons, who were from a disadvantaged background. As well, her college students taught her some important lessons. "You don't know where a child's base of thought is coming from and you do not know what a child has witnessed," she reminded the crowd.

Also kicking off the conference was Oscar Chavez, Sonoma County's Assistant Director of Human Services. He attended Sonoma County schools and overcame childhood adversity in order to become the leader he is today. "Not all communities are created equal," he said, referencing the landmark "Portrait of Sonoma" study that showed that residents in some pockets of Sonoma County lack access to key services and have lower academic achievement rates than those in other neighborhoods. "There are clear differences that are often the results of policies (that have been created over time)," he said. He urged the community to invest in children early on.

The conference featured many breakout sessions throughout the rest of the day focusing on issues like:

Learn more about SCOE's efforts to promote equity at scoe.org/equity.