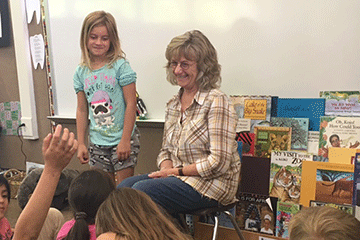 A Guerneville School Teacher, Mrs. Georgia Tammy Leyden, was honored this school year as a semi-finalist in the state teacher of the year contest. In May of 2016, she was selected by the Sonoma County Office of Education as the county's nominee for the state awards program. Teachers from all around California were nominated by county offices for the prestigious honor. The California Teacher of the Year program named five educators "teacher of the year," while eight teachers received a finalist status and four more were named semi-finalists.

Leyden, who retired in May of 2016, taught a first/second grade combination class at Guerneville School and has served in the teaching profession for nearly 40 years. She was honored for, among other things, her leadership and mentorship of other teachers; her ability to engage students; and her uniquely engaging and vibrant classroom. Perhaps most importantly, Leyden showed a winning way with her young charges and a warm ability to communicate important issues to parents. She was seldom seen without a current or former student hugging her, the nomination notes.

“I’ve never seen anything like it,” said Superintendent Dana Pedersen at the time of her nomination. “On a daily basis Tammy emulates what a life-long learner is by genuinely wondering, inquiring and thinking alongside the students she teaches, the colleagues she mentors, and the countless pre-service teachers she coaches.”