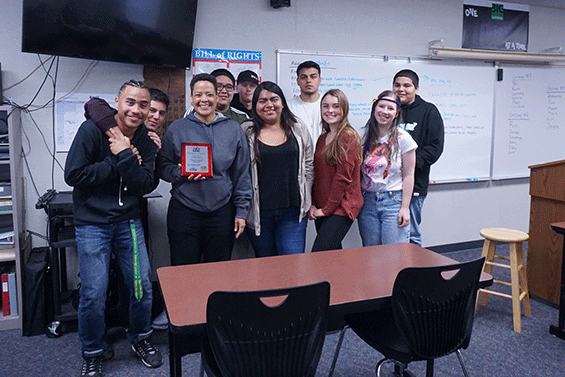 Sometimes, a student is lucky enough to have a teacher who transforms his or her life. This was the case for one former student who nominated Ms Dana Jones, a social science teacher at Windsor Oaks Academy, for Sonoma County Teacher of the Month. For the month of March, Ms. Jones won the award, which honors one of Sonoma County's most outstanding teachers from October through May. It is sponsored by the Sonoma County Office of Education (SCOE), Mix 104.9, Community First Credit Union (CFCU), and Platinum Chevrolet.

Community members nominate a favorite teacher to Mix 104.9. Then SCOE selects a winning teacher based on the number of nominations received for that teacher as well as the quality of the nominations. Winners receive a plaque, recognition on Mix 104.9, and a $400 gift card for classroom supplies, courtesy of Platinum Chevrolet.

The Windsor Oaks alumnus who nominated Ms. Jones wrote compellingly about how Ms. Jones makes a difference in the lives of not just one or two, but many, of her students. Windsor Oaks is an alternative education high school in the Windsor Unified School District. It serves students who, for a variety of reasons, struggle in a traditional school setting. While some people might view students there as "burnouts" or dropouts," Ms. Jones never does, wrote her former student. She added, "she challenges you to make yourself better and prove other people wrong. She's the reason I broke out of my 'shell.'" She wrote that she has gone on to Sonoma State University, where she is pursuing a degree. As well, she already has an internship and full-time job lined up. "She saw my potential, as she sees all her students' potential," she wrote. "I don't think I'd be here without her."

Windsor Oaks Principal Susan Nystrom affirmed that Ms. Jones sees and brings out the potential in many of her students, adding that she's played an important role in an educational program called Big Picture Learning. In this initiative, students have very individualized learning plans that have them out in the community, following their passions through internships and community involvement, while also earning academic credit.

Dr. Herrington encouraged anyone who knows a wonderful teacher to submit their name, along with an explanation of why they deserve the honor, at the Teacher of the Month page on Mix 104.9. He also encouraged the public to stay tuned for the next winner, who will be announced in April.