Educators, businesses team up to support blind student and his family 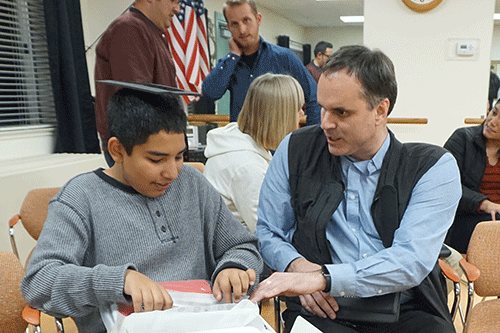 Mario Chitwood is a completely blind eighth grade student whose family had just bought its first home three weeks before the fires hit in the Coffey Park neighborhood in Santa Rosa. When the North Bay Firestorm swept through his neighborhood, he lost everything— his house, his family dog, and a handheld, electronic Braille device that helped him navigate the world.

On Tuesday, Nov. 14, he received a free replacement of the more than $5,000 device, the BrailleSense Polaris Notetaker as well as a check for his families, donations of toys for his younger brother, and much more during a special event at the Earle Baum Center of the Blind in Santa Rosa. In a strong show of community after the the fire, family members, teachers, teaching assistants, friends, and many others showed up to celebrate Mario's perseverance and support his family.

The BrailleSense Polaris is a Google certified braille tablet combining traditional notetaker features such as word processing, math, internet and email, with access to Google services such as Google Docs, Drive, Sheets and Classroom, and the ability to download apps from the Google Play Store.

The company that makes the BrailleSense Polaris, HIMS Inc., presented the new device to Mario at a monthly gathering for blind and visually impaired students that takes place at Santa Rosa’s Earle Baum Center, 4539 Occidental Road. The Earle Baum Center serves people with sight loss in the North Bay. The company's vice president of sales and marketing, Damian Pickering (who is also blind) presented Mario with the Notetaker. As a surprise, another company selling technology for students with sight loss, Sterling Adaptives, was there to present a check and other donations it had gathered for Mario's family. 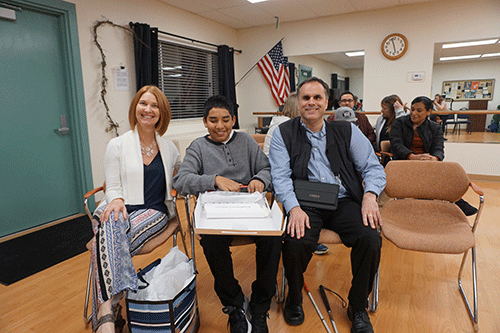 Neal McKenzie, an assistive technology specialist at the Sonoma County Office of Education, has worked with Mario since third grade. He worked closely with HIMS to secure the donation of the new device for Mario.

“This was the first device I taught Mario and it has become something he absolutely loves and depends on each and every day for normal access,” McKenzie said. “He was even scared to tell us he left it behind when escaping the fire. We all strongly reassured him that his safety was the only thing that we were concerned with and how unbelievably happy we were that his family made it out in time.”

McKenzie added that not only will the device restore some much-needed routine and independence for Mario—it also marks a positive moment in a very difficult year for the young student. Mario’s family had just bought and moved into their Coffey Park house shortly before the fires began. The home, for a short time, offered a respite from the prior year’s chaos, when Mario and his mother, Cindy, were forced back to Mexico for roughly six months due to a backlog in processing immigration paperwork. During that time they were disconnected from school and family, including Mario’s two-year-old baby brother. This separation affected Mario’s education and caused enormous stress for him and his family. The presentation of the Braille device has provided the family something to look forward to. 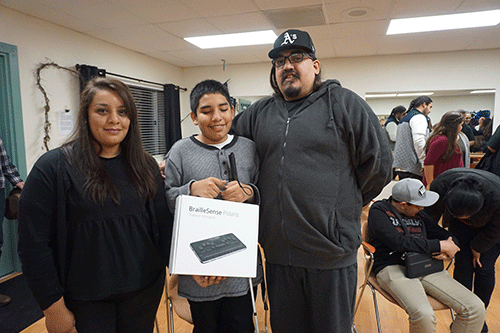 If you'd like to support Mario and their family, visit their GoFundMe page here.

If you'd like to support schools and students in general, visit scoe.org/schoolfirerelief for ways to help.

HIMS, Inc. is a global leader in Braille and Low Vision Assistive Technology products. For more information: please visit their website at www.hims-inc.com or call Jayne Bassett at 512-837-2000.